Last weekend in Tržič was a busy one, with, among others, a medieval day in the village of Žiganja vas, and Tržič Trail Days – a weekend of guided mountain bike rides. It was a toss up between the two, but I opted to first visit the former – perhaps I have a secret penchant for medieval torture, or perhaps because it meant there was then time to go on to a nearby inn I had heard good things about! 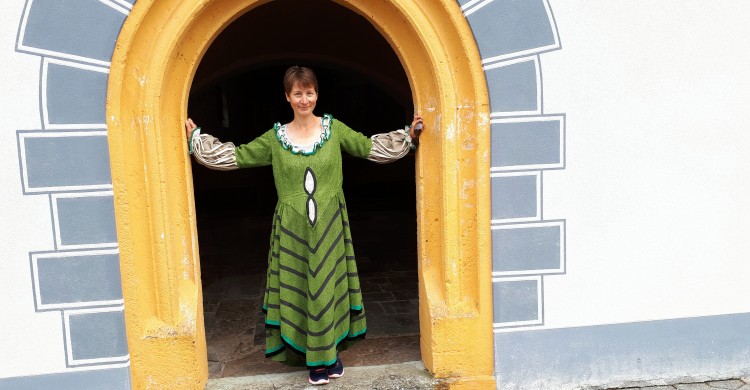 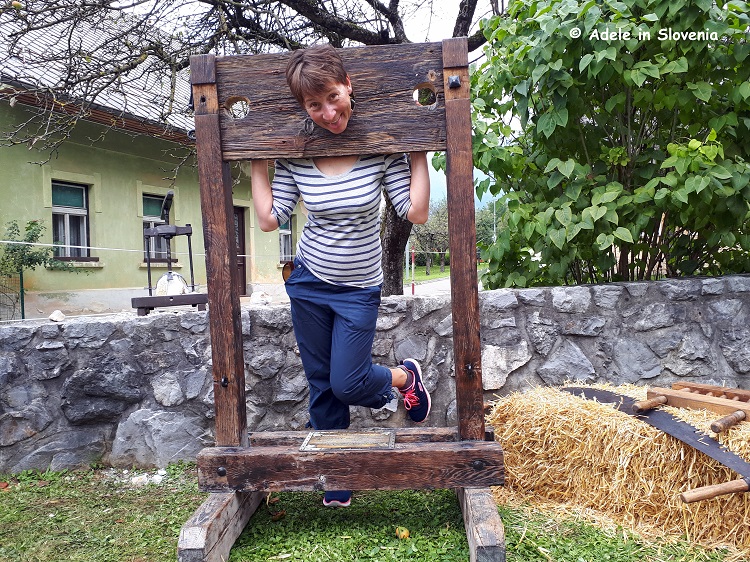 Though only small, the village of Žiganja vas has a number of interesting attractions; the village church, the Three Bells Trail (which I wrote about in a previous blog post here), and the giant village linden tree, which is so huge – and partly hollow – that you can actually go inside it. 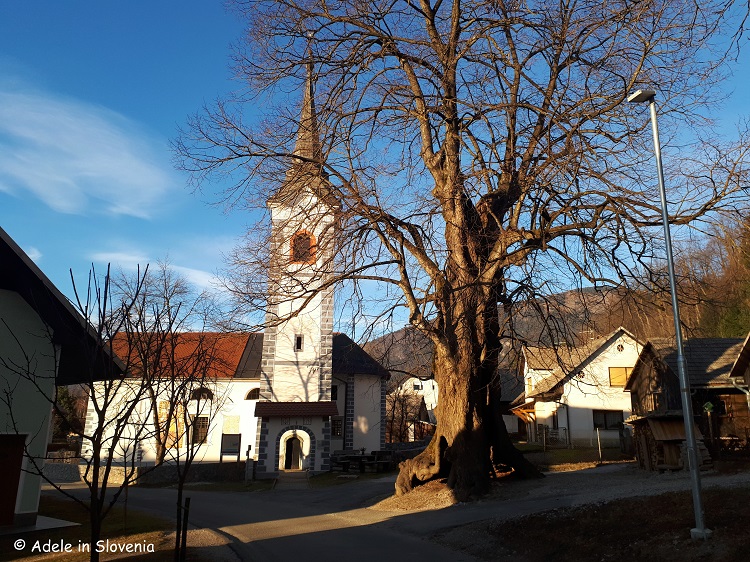 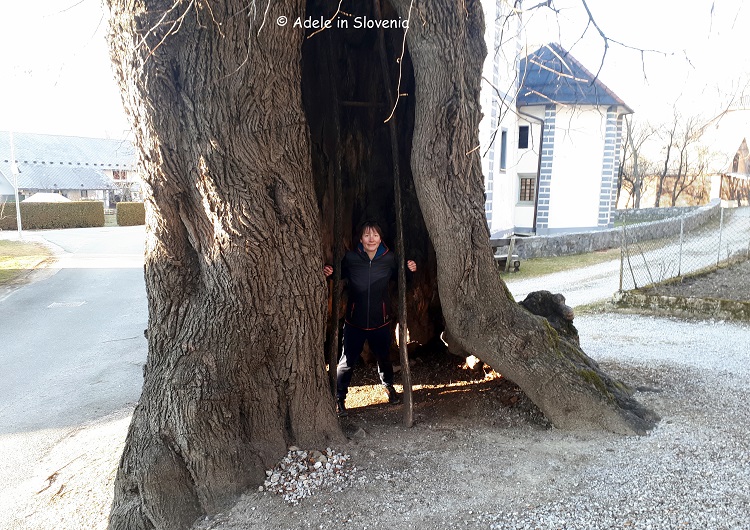 The recently renovated St. Ulrich’s church stands in the centre of the village. The first written mention of the church dates back to 1327; its present day appearance dates largely from extensive rebuilding work in 1693, as well as recent renovations to both the exterior and interior. 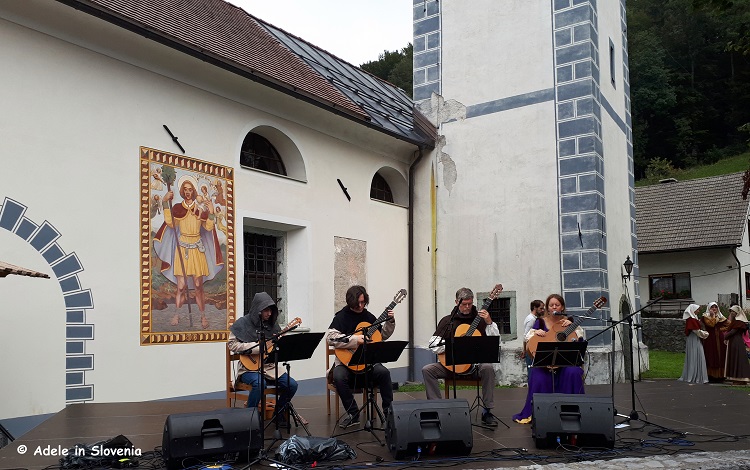 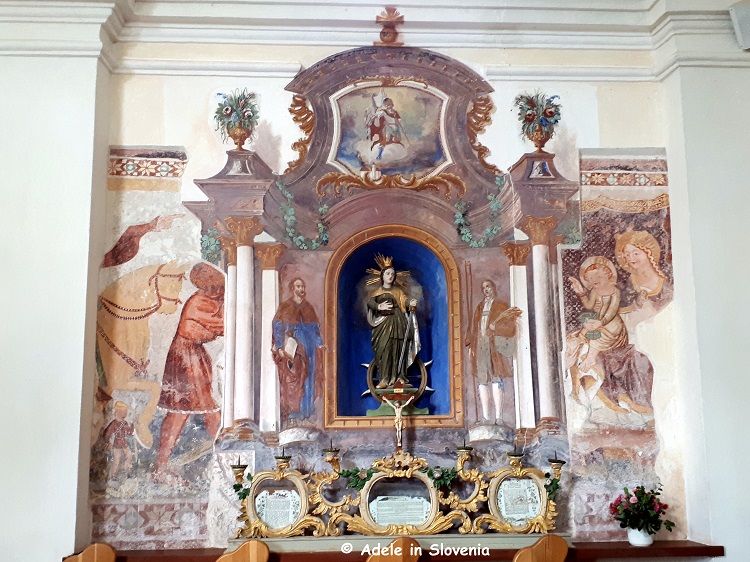 The medieval day featured plenty for visitors to see and do; guided tours of the renovated church, archery, the chance to dress up in medieval costume, theatrical and musical performances, and more. 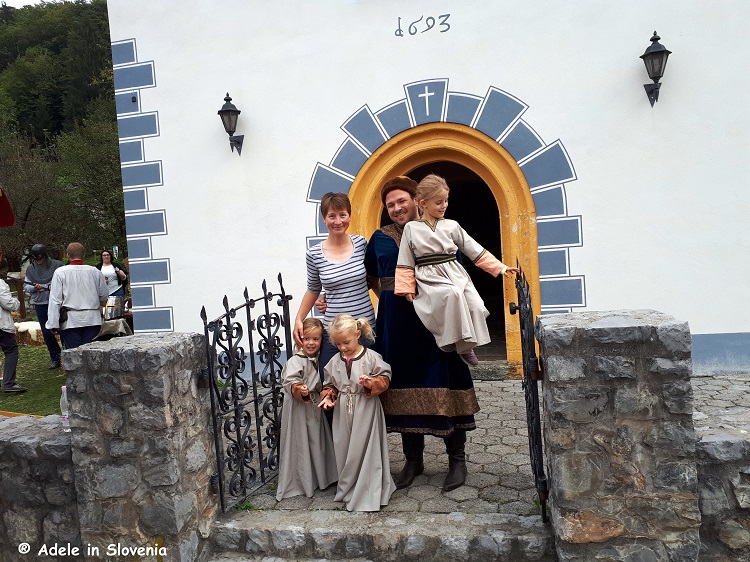 It was very well attended and its nice to see such events in small villages; it helps to bring the community closer as well as attracting visitors from further afield. Next year Tržič will be celebrating a special anniversary and many more such events are planned, so, keep your eyes peeled for more!

From Žiganja vas we drove the short distance to the village of Senično and the Gostilna pri Bajdu inn. Since being diagnosed with coeliac disease going to restaurants isn’t the experience it used to be, and in fact can be quite stressful never knowing exactly how a dish has been prepared and if it could have been ‘contaminated’ during preparation. I had been told that they do things “somewhat differently” at Gostilna pri Bajdu, so I decided it was time to boldly go and check it out for myself! 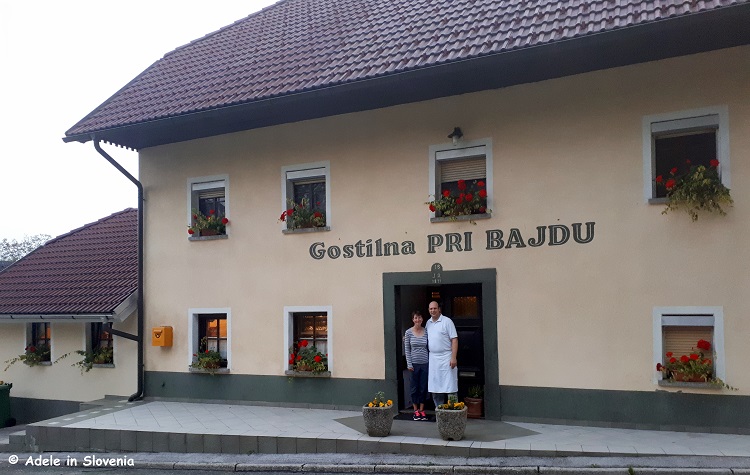 The family-run inn dates back to 1871, as is attested to by the year above the main entrance. It originally served as a stopping point for wagon drivers on long journeys, where their horses could rest for a while and the drivers could get some sustenance. The inn has remained in the hands of the same family since its establishment and throughout the years has become increasingly popular for its excellent home-cooked food, service and hospitality.

It is now being run by the fourth generation of the family, Jani Ribnikar, who, time permitting, is more than happy to take time to talk about the history of the inn and to recommend which of its many dishes to try. 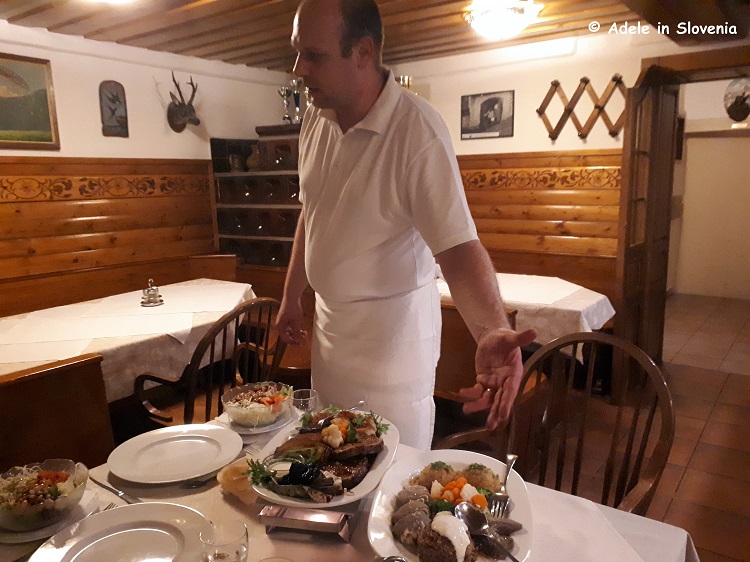 The bar area is reminiscent of an English pub, complete with various humorous pub-like signs too! 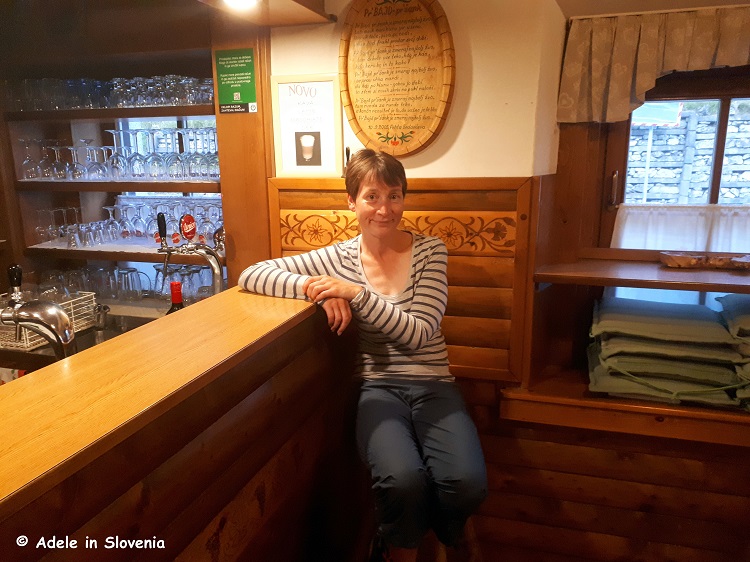 And almost every detail in the restaurant has a story behind it, from the pictures and wood carvings to the trophies and other quaint touches. 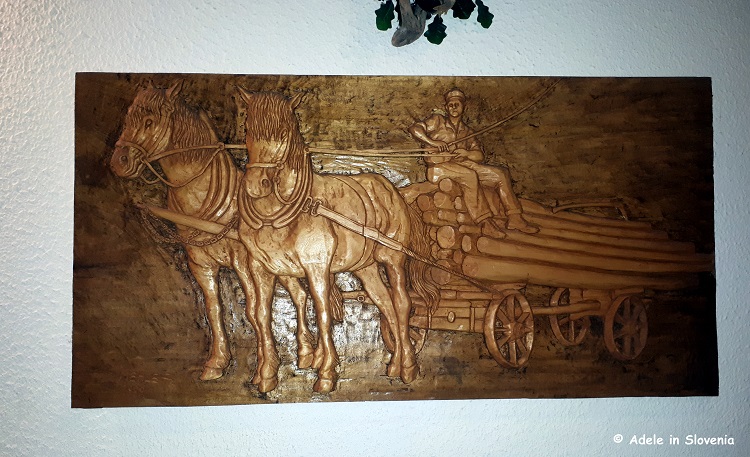 The huge pork and veal shanks are also a favourite among diners – though do call to order in advance to avoid disappointment! 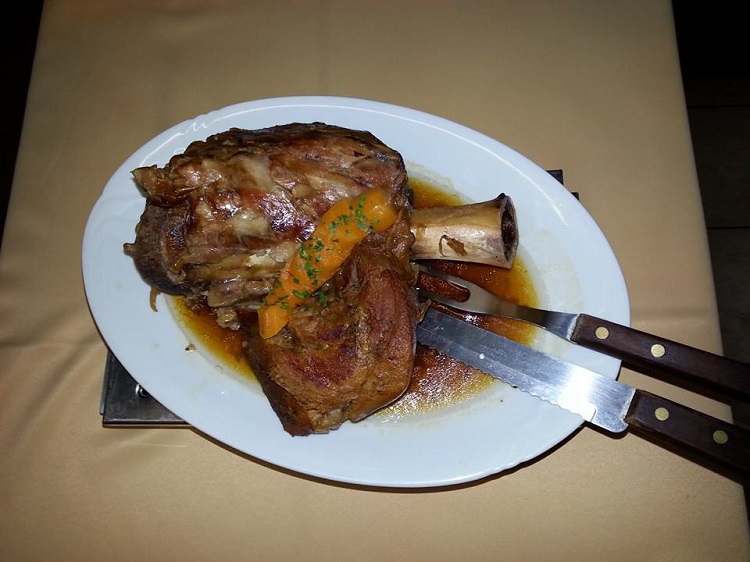 When Jani said we wouldn’t leave hungry, he wasn’t wrong! We were first treated to pumpkin soup and beef soup. 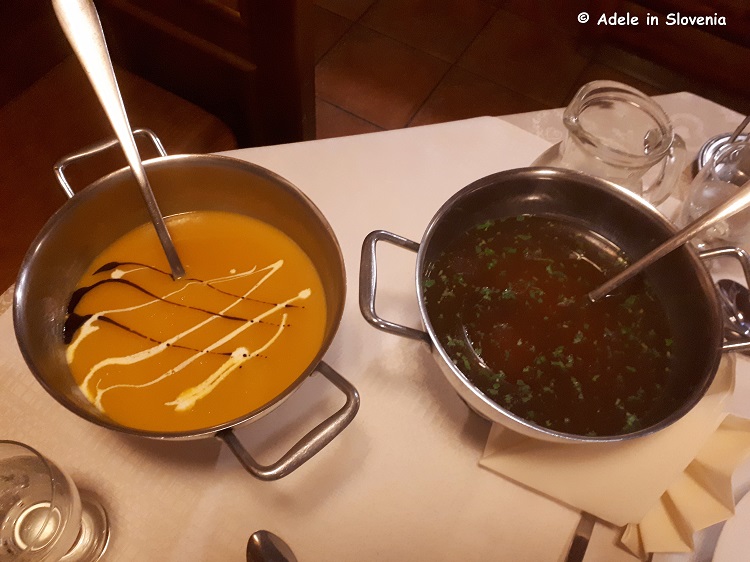 Followed by two huge platters – one meat-based, the other with vegetables and side dishes made from buckwheat flour, which I can eat, yippee! The  meat-based platter was packed with pork ribs, roast pork and venison – that latter is a popular choice, and at Gostilna pri Bajdu where they serve game with prunes rather than the usual cranberries, thus giving a nod to the tradition of plum-growing in the area. 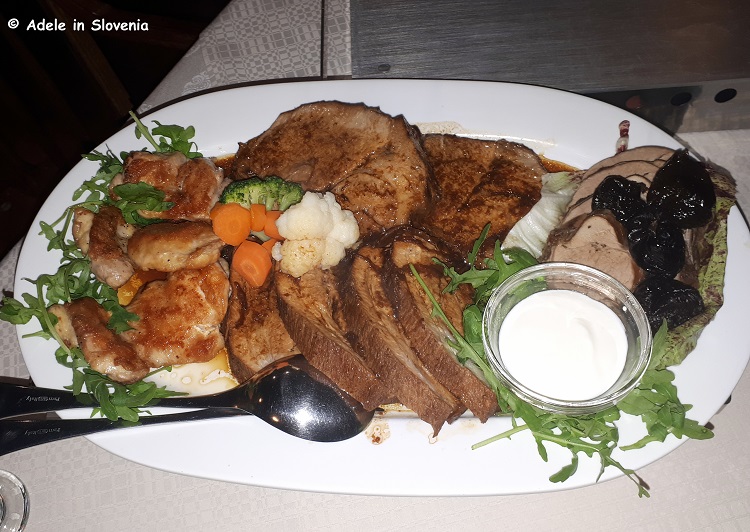 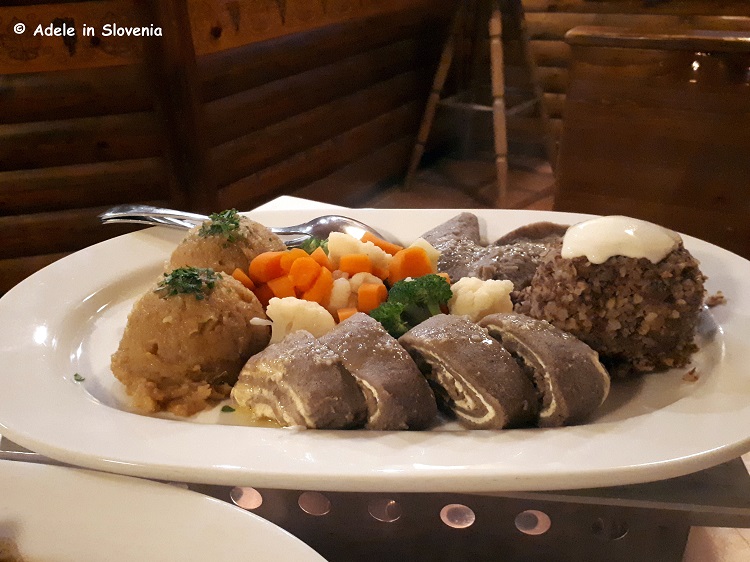 With so much choice it was hard to know where to start – but we managed…and found room for dessert too! 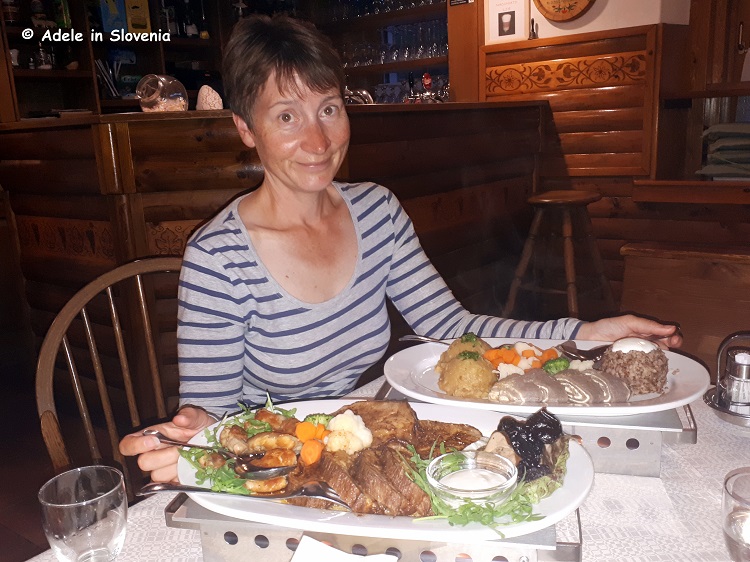 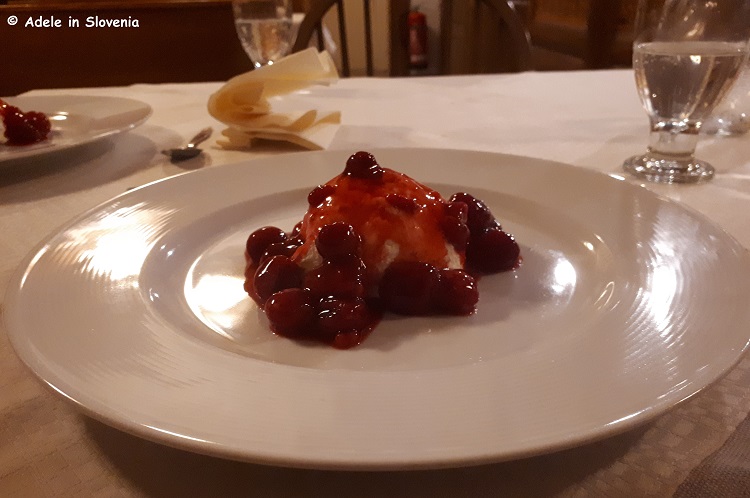 It’s satisfying to know that not only are you eating a meal made with from scratch and with passion, but also you are eating in a restaurant full of pride and tradition. From the outside Gostilna pri Bajdu is nothing to look at, and it would be easy to pass by the inn without even noticing it, however, now I have discovered it, I shan’t be in any hurry to pass by without stopping, and, if/when you are in the area, recommend that you drop in too! Dober tek!