Although Tržič lies in the heart of the Karawanks, it is easily accessible. By car, the Podtabor exit for Tržič can be reached in less than 10 minutes driving along the Gorenjska motorway, and it is close to Ljubljana Jože Pučnik Airport as well as to railway stations. 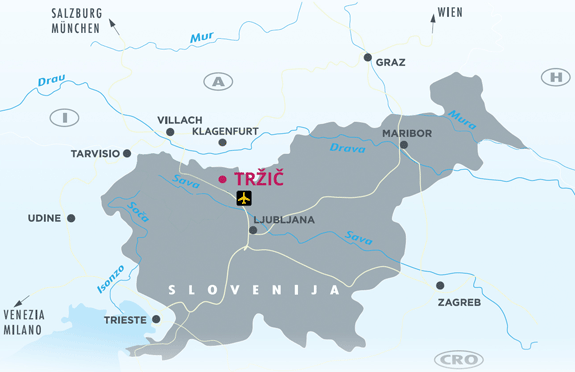 To Tržič by car

From Ljubljana, get on the Gorenjska motorway, which takes you north towards the Karawanks Tunnel. Take the Podtabor exit and turn on to the main road towards Ljubelj (Loibl) Pass. Drive about 5 kilometers, then turn right before the petrol station. Drive past the police station and Gorenjska Beach (a swimming pool complex) and after a bit more than a kilometre you'll come to the town of Tržič.

Coming from Bled, follow the signs for the motorway. Go straight at the intersection in Lesce, then take the second exit at the roundabout. Take the motorway entrance in the direction of Ljublana and drive for 12 kilometres, then get off at the Podtabor exit. Turn onto the main road going towards Ljubelj. Drive 5 kilometres, then turn right before the petrol station. Drive past the police station and Gorenjska Beach (a swimming pool complex) and after a bit more than a kilometre you'll come to the town of Tržič.

SUSTAINABLE MOBILITY IS OUR FUTURE

TO Tržič by bus

There are regular buses several times a day between Tržič and Kranj, Radovljica, and Ljubljana. AlpeAdria Line has four buses a day between Ljubljana and Klagenfurt. The stop nearest Tržič is in Kranj.

Timetables in the Alps

to Tržič by train

The nearest train stations are in Kranj and Radovljica, from which Tržič can be reached in half an hour by bus.

To Tržič by air

Tržič is only 25 kilometres from Ljubljana Jože Pučnik Airport, or 20 minutes by car. The next closest airport is in Klagenfurt, 46 kilometers distant.