MINFOS and the St. Anne Mine

The Tržič area is known to be one of the most fascinating areas of Slovenia in geological terms. 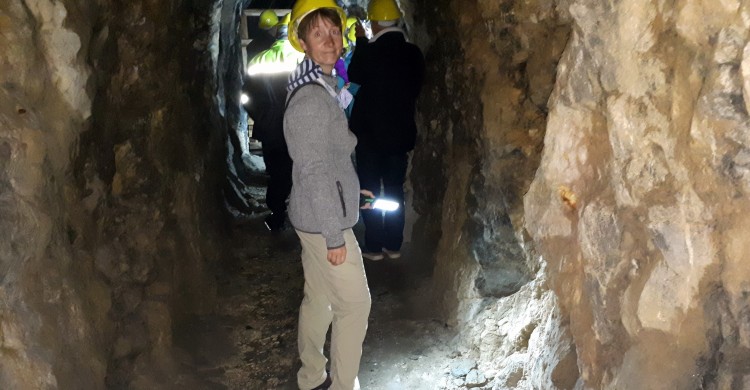 MINFOS is an annual 2-day exhibition of minerals and fossils, which, together with the Dolina Exhibition and Education Centre* and some fascinating geological trails, showcases the area’s rich geological treasures. The exhibition is held in the Tržič Olympians Arena (the red-roofed building just out of sight to the left of building in the foreground below) in the heart of the picturesque old town. 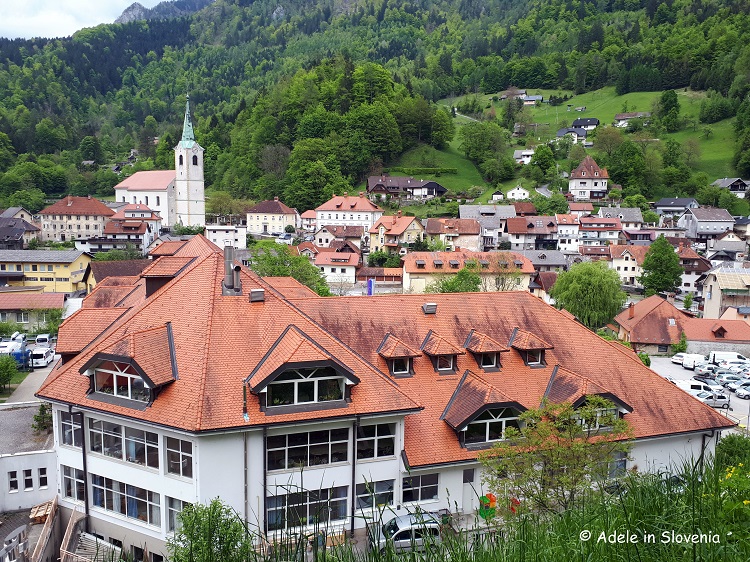 The event unites visitors and exhibitors from far and wide, from those with a specific interest in minerals and fossils wanting to enrich their knowledge by viewing specialised exhibits, talking to experts, and/or attending creative and educational workshops, to those who just want to take a look and/or maybe treat themselves or their loved ones to some new jewellery or other gifts. 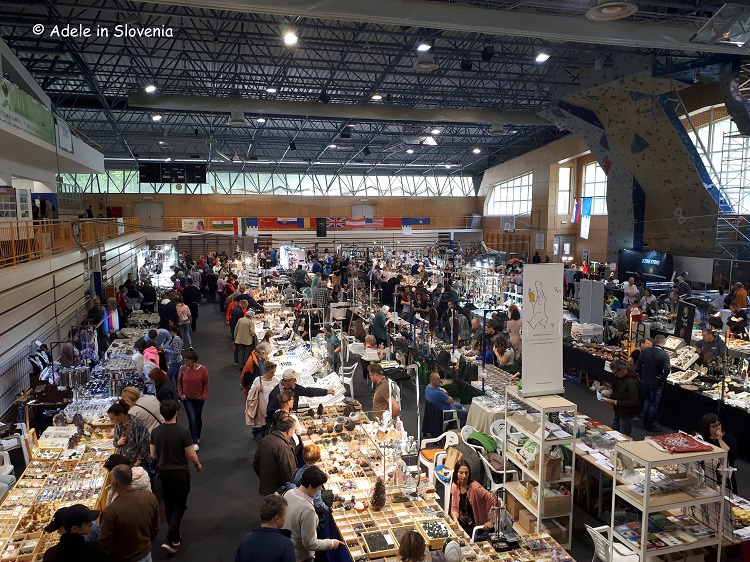 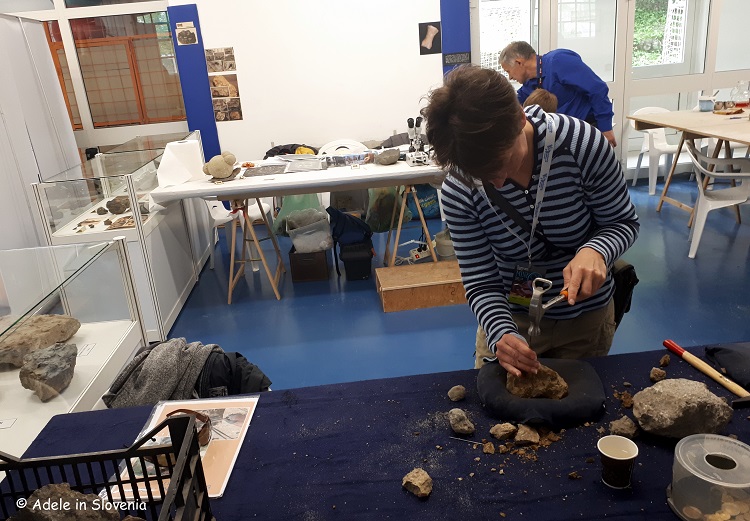 There is a fascinating array of exhibits of almost every shape, colour and size imaginable… 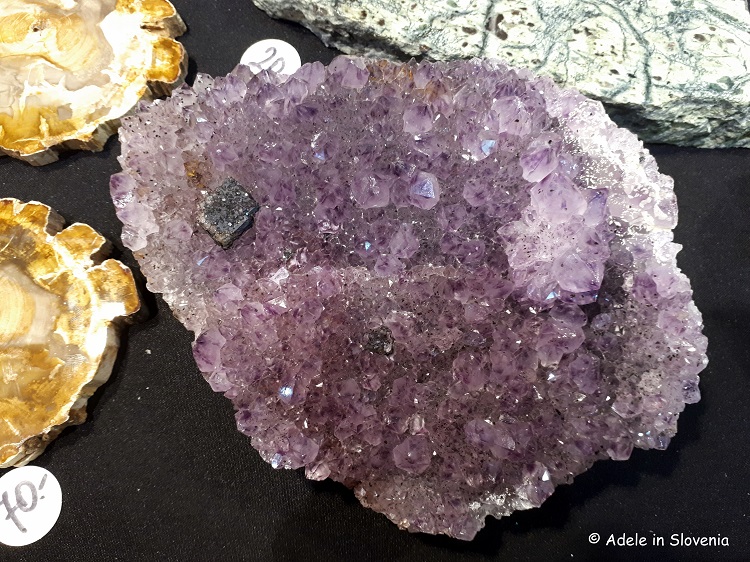 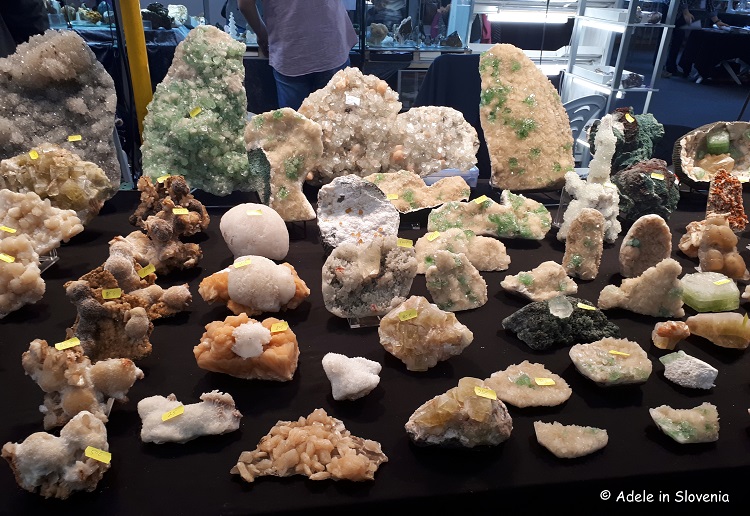 …and you wouldn’t believe how heavy some of them are, despite the relatively small size! 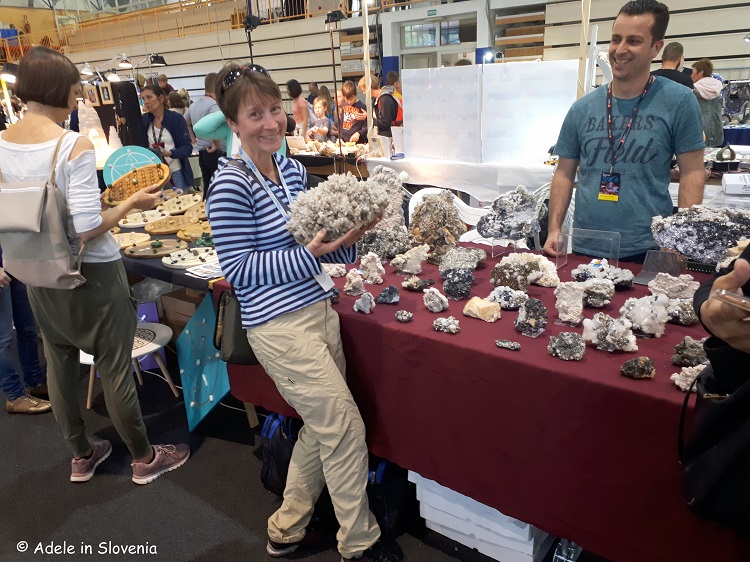 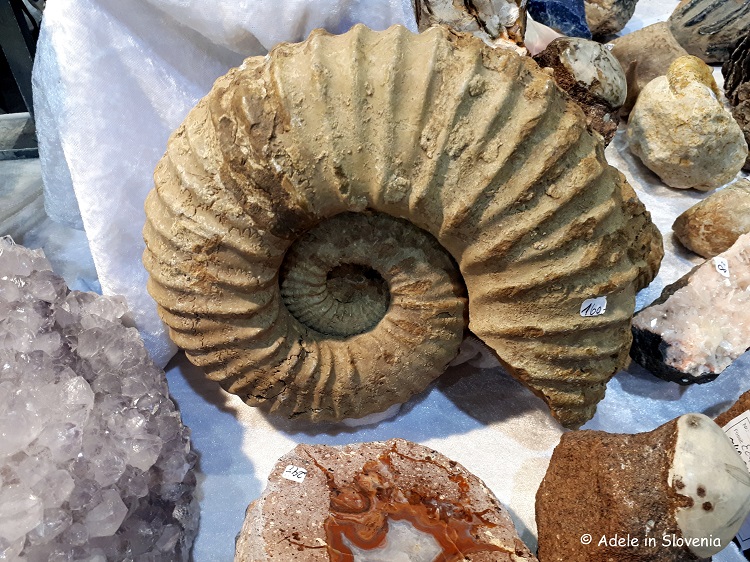 Although this year’s MINFOS took place last weekend – hence its too late to visit this year – you can instead visit the Dolina Exhibition and Education Centre in the hamlet of Dolina located along the valley of the Dovžan gorge** (Dovžanova soteska), just over 3 kilometres northeast of Tržič.

At the centre you can find out more about the picturesque valley that was carved out by the Tržič Bistrica river which laid bare the most complete sequence of rocks from the younger Paleozoic period, ranging in age from 300 to 260 million years.

As part of MINFOS, visitors are offered guided tours of the Dovžan gorge and the St. Anne mine (Šentanski rudnik) I chose to visit the latter. Guided tours can also be arranged at other times via the Tržič Tourist Information Centre. 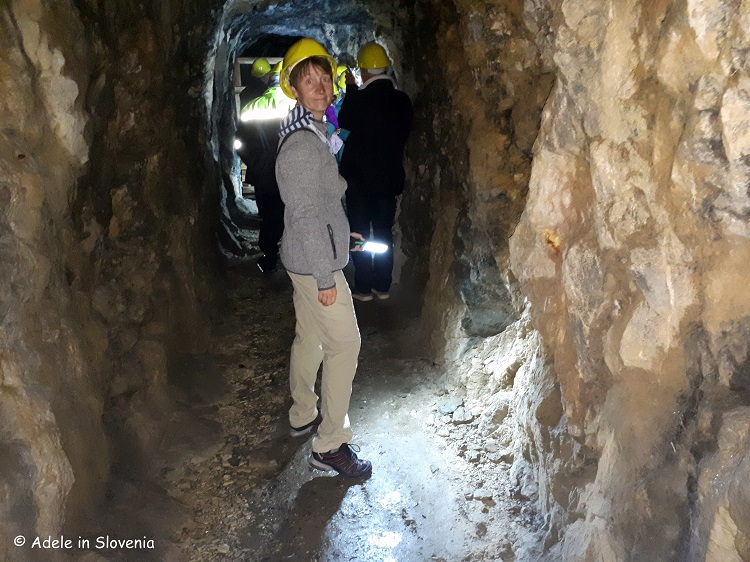 Whilst in the past Idrija was the hub of Slovenia’s mercury mining industry, a number of miners from Idrija also came to work at the mine at Podljubelj. Regular production of cinnabar began at the mine in 1975 but ceased just a quarter of a century later in 1902 due to the low amount of mercury in the ore. A total of about 110,000 tonnes of ore and almost 300 tonnes of mercury were obtained from the mine.

Our incredibly knowledgeable guide, Luka, enlightened us about the history of the mine. At the end of the 19th century, 75 miners worked at the mine, of which 24 were women. But I won’t divulge all the details and spoil the surprise, instead why not take a tour and see it for yourself!

The tour begins by passing the entrance to the 450 metre-long Avgust mine, which served as a service route.

The Friderik mine was the main export tunnel for tailings. 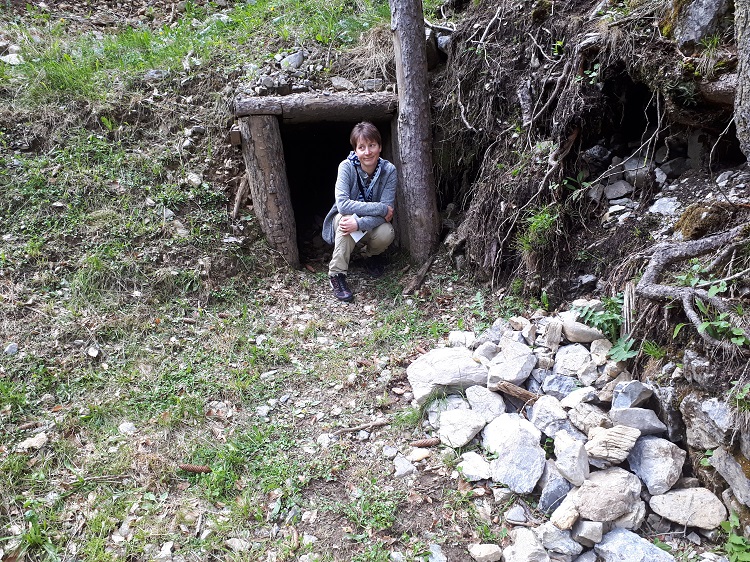 The Anton mine, which was the most rich in ore and was thus also the most mined, is the only part that is open for visitors on the tour. Before entering we donned hard hats and were given torches, then we were off…into the unknown! 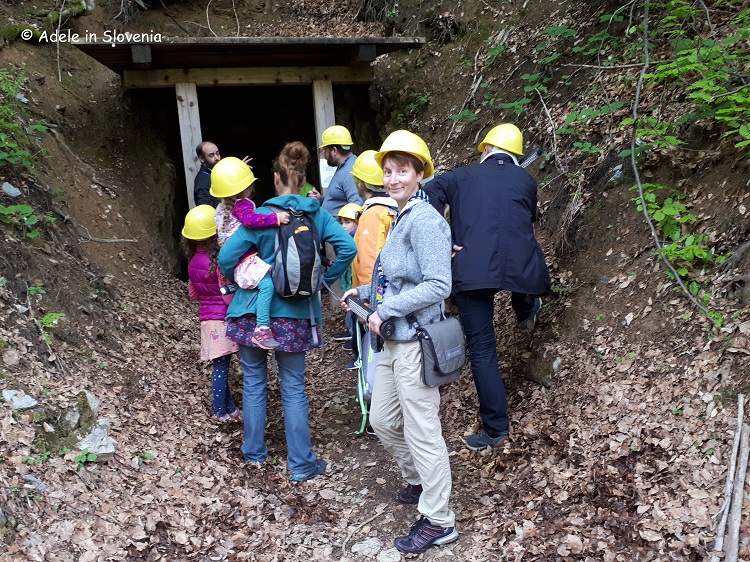 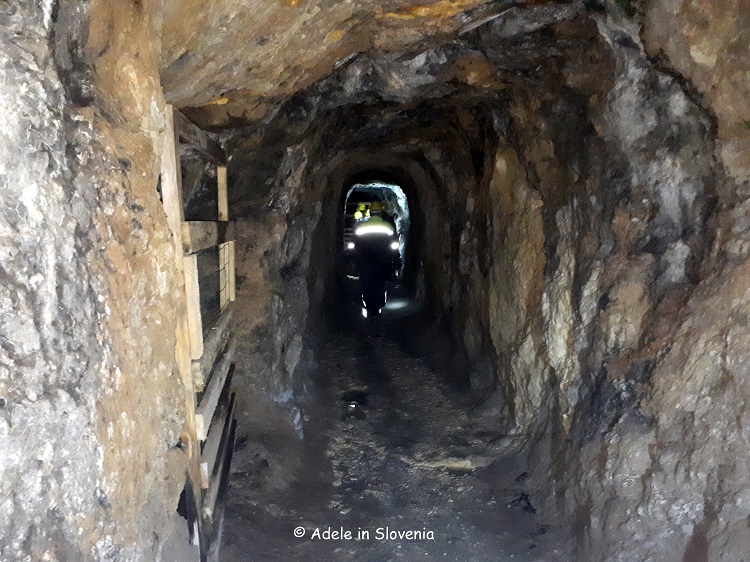 Luka told us many more fascinating facts, demonstrated the depth of the deepest shaft – approx. 35 metres, and pointed out the traces of cinnabar that can still be seen on the walls of the mine as well as beneath foot. 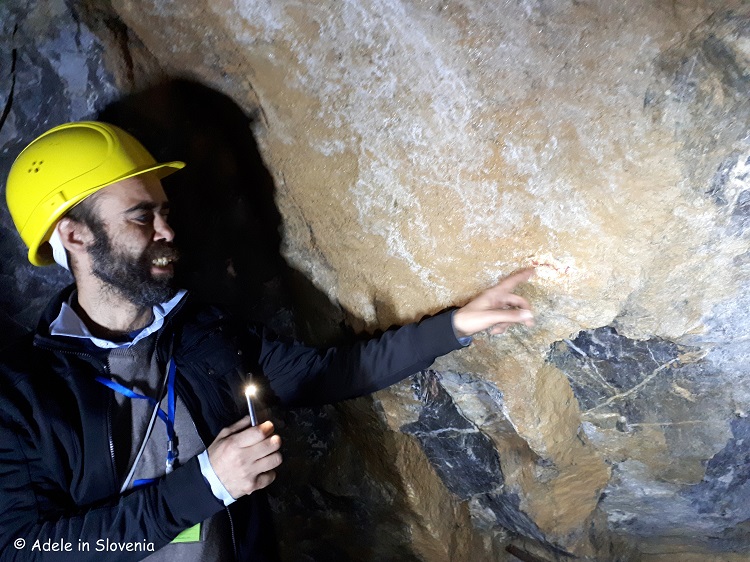 It is a bit nippy in there, so be sure to wrap up well – regardless of the weather outdoors – but it’s certainly worth it for a glimpse into part of Tržič’s history.

* In fine weather the Dolina Exhibition and Education Centre is open from May until the end of October at weekends and on public holidays from 11am to 6pm, and at other times by prior arrangement.

** Due to extensive flooding in October 2018, part of the path through the Dovžan gorge is closed, but rest assured, once it is open again I will be blogging about that too!